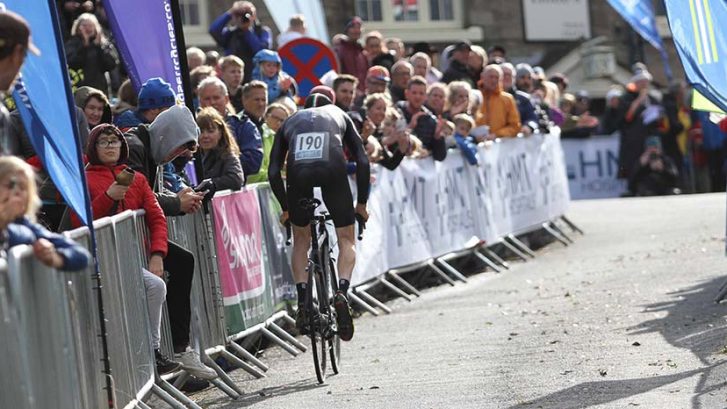 The 92nd running of this hill climb classic, organised Sheffrec Cycling Club and sponsored by HMT St Hugh’s Hospital, has a great field with 181 entries – including three former winners.

The senior men’s category is expected to be a very close run race for the podium places. Unsurprisingly, with so many riders and the event being one of the most – if not the most – prestigious event on the hill climb calendar, there are a many potential winners.

This year two-time winner and the second fastest rider in the events history, Calum Brown, is absent, along with last year’s winner, Andy Nichols, who is injured. This leaves the door well and truly open. Adam Kenway, Brother UK, has won at Monsal before, and the ex-national hill climb champion will certainly have one eye on the top step of the podium. Fresh from a win last weekend, Adam is always solid at Monsal and knows how to gauge his effort up the 1-in-6 climb. He will face some strong competition for the top spot on Sunday as there are a couple that could challenge for the podium places.

Gregg Booker, SUMMAT CC, is fresh from a win at Hardwick Hall and placed fourth overall last year will be looking to grab a share of the £2100 prize list. Also on the start sheet is Joe Shillabeer. The Saint Piran rider produced a great ride last year at his first attempt and is back to try and go that bit faster to be up there with the likes of Kenway and Booker. No strangers to Monsal are Josh Coyne and Cameron Biddle, who have both posted 1:21 rides in the past, so these could also threaten Kenway, Booker and Shilabeer.

The HMT ladies cup is another packed field full of talent. The 2021 winner, current double national hill climb champion, Bithja Jones is back to defend her titles. Bithja took Monsal by storm last year by smashing five seconds off the course record and also winning the women’s veteran category. Bithja is the only rider back this year from last year’s top five, so she is out and out favourite to take the win again on Sunday. Emilie Verroken, Team Lifting Gear Products, and Becky Hair, Team Watto. will be looking to repeat their rides from last year. Verroken won at Hardwick Hall so she’s on good form. Like the men’s category, there are several riders who could easily podium. Iona Sewell, Datalynx-Parenesis Cycling, Maya Branfoot, Wahoo Endurance Zone p/b Le Col, Erin Avill, and Storey Racing are all contenders.

Everyone is in search of a slice from the £2100 prize fund. First prize is £200, and there is an equal prize for men and women, and top three prizes for all categories. The big question is, can anyone be a real threat to the 41-year-old record set by Elliott in 1981? Calum Brown came close in 2018 with a 1:14.5, just three tenths off, so it’s a possibility but history has proven it’s a very big ask.

The vets race is also looking like a two-horse race; with defending vets Monasl champion Dan Evans absent, Nicolas Latimer and Darren Kidson have a great opportunity to get their name on the Cope Trophy.

First run in 1930, Monsal Hill Climb has been on the hill climb calendar for an amazing 92 years. This event was first started by a few mates riding out to Monsal Head at the end of the track season and timing each other up the hill, at this time it was an unmade road. How times have changed… the course is a one-in-six and 675 yards long.

This year the event has two new partners. HMT St Hugh’s Hospital, which has sponsored the event for the last six years, offers private access to a wide range of treatments and consultants and well as NHS treatment. It is a not-for-profit organisation and all of its surpluses supports health research. HMT stands for the Healthcare Management Trust, the hospital’s parent company, which was founded in 1985 as a registered charity.

It is joined this year by Bioracer UK, the market leader in custom cycling apparel. Obsessed with making riders go faster, every detail is incorporated into producing the fastest possible cycling kit for every racer, from amateur to professional. Famed for its unique custom design capabilities, supplying innovative and distinct kit designs for clubs and race teams all over the world, including the esteemed INEOS Grenadiers.

Event organiser Marc Etches said: “This is a great partnership and the support from HMT St Hugh’s Hospital and Bioracer UK has made this prestigious event now even more prestigious. We are excited to be able to offer such a great prize list to all the riders and we will now continue to lead the way in setting the standard hill climb promotion nationally.”