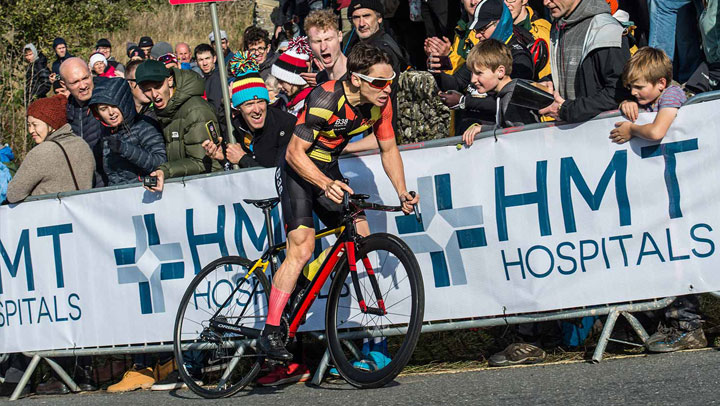 The 91st running of this hill climb classic, organised Sheffrec Cycling Club has a very classy field of 238 entries including four former winners. Both men’s and women’s defending Monsal champions, Calum Brown, Team Lifting Gear Products/Cycles In Motion and Rebecca Richardson, Team Brother UK are on the start sheet and will face some strong competition for the top spot on Sunday.

The men’s category is expected to be a very close run race for the podium places. Unsurprisingly with so many riders and the event being one of, if not the most prestigious event on the hill climb calendar, there are a lots of potential winners. Aside from two times winner and the second fastest rider in the event history, Calum Brown we have joint second placed riders in 2019, Adam Kenway, Brother UK and Brown’s team mate Andy Nichols on the start line. Nichols has been flying, he won the promoting club, Sheffrec CC’s summer hill climb at Bradfield back in August and continued his great run of form with convincing wins at Hardwick Hall and Pea Royd Lane last week. Adam Kenway is always solid at Monsal so the usual three way fight will be on the cards for sure. This year there are a couple that could spring a surprise. Gregg Booker, Matlock CC has finished second to Nichols twice so he’s on form and will certainly be looking to the challenge for a podium place. Also on the start sheet is James Shaw. The Ribble Weldtite Pro Cycling rider is fresh from the Tour of Britain and is a natural climber and one rider who could certainly strike a big bow to the Monsal regulars. Jim Brown, Canyon dhb SunGod is no stranger to Monsal and he’s back after his podium place as a junior in 2016.

The HMT ladies cup is another packed field full of talent. 2019 winner Rebbecca Richardson, Brother UK has some major competition, headed by an on form National Hill Climb Champion, Bithja Jones, Pankhurst Cycles who is riding the event for the first time. Second and third placed riders from 2019 are also back. Emilie Verroken, Team Lifting Gear Products/Cycles In Motion and Becky Hair, Magspeed Racing will be looking to repeat their rides from 2 years ago. Hair is going well after winning last week on Peak Royd Lane. Verroken finished second at Hardwick Hall to a flying Zoe Langham. The Beeston RC rider will certainly have an eye on the podium. Like the men’s category, there are several riders would could easily podium. Mary Wilkinson, Yorkshire Road Club, Monica Greenwood, Macclesfield Wheelers and Joanna Blackburn, Team Bottrill are contenders. Wilkinson finished 2nd and Greenwood finished 3rd at the 2020 National Hill Climb Championships and Blackburn is flying after a win on the longer Struggle Hill Climb last week, so the fight for the top spot is well and truly wide open.

The vets race is also looking like a three horse race with defending vets champion and course record holder, Steve Tait, OVB is back to stamp his mark on the climb once again. This year he’ll face a fresh challenge from first year vet, Dan Evans, Assos Speed Club UK. The former National Hill Climb champion will be strong competition for Tait and Evans may even be a threat to the vets course record of 1.1:25.3. Darrell Clarke, Ilkeston Cycle Club was 3rd in 2019 and placed 2nd at Hardwick a few weeks ago so has the form to challenge Tait and Evans.

First run in 1930, Monsal Hill Climb has been on the hill climb calendar for an amazing 91 years. This event was first started by a few mates riding out to Monsal Head at the end of the track season and timing each other up the hill, at this time it was an unmade road. How times have changed. The course is a one-in-six and 675 yards long.

This year is again supported by the Healthcare Management Trust. HMT were founded in 1985 as a registered charity to provide consultancy services to healthcare providers.

HMT’s aim has always been to develop and promote the services offered by associated charitable hospitals and care homes so that they can be a viable alternative to the commercial companies both now and into the future. Event organiser, Marc Etches commented

“This is a great partnership and the support from HMT has made this prestigious event now very prestigious. We are excited to be able to offer such a great prize list to all the riders and we will now continue to lead the way in setting the standard very high in hill climb promotion nationally”.

“It is an honour for HMT Hospitals to be supporting such a historic event, and one that really brings professional cycling close to communities. The Monsal Hill Climb gives local club cyclists the opportunity to compete against world-class athletes and serves to promote cycling in general. Cycling is a sport that aligns with our goal of promoting health and wellbeing to all ages and abilities, and that is epitomised in this event.”